With Blood and Sweat: Antenna Field

So I took the opportunity to field my Shock Army after some time, having finished painting the Tikbalang this morning I wanted to run it, and my opponent wanted to run his finished Iguana.

Mission was Antenna Field. Here the board with deployment: 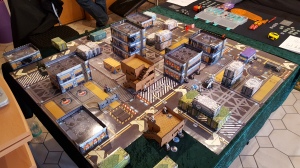 I won the roll and decided for sides, he took 1. Turn, which I liked very much.

He deployed with the Haris and the Bandit on my left flank and the Wildcats on my right, Moran and Paramedic were in the center, where the Iguana went as well.

I had Scylla a Machinist and the Bagh-Mari guard my left, The link was center-right, Bulleteer was out right and Tikbalang and second Machinst were center. Palbots were well distributed. Naga infiltrated as far forward as possible. With only the TAG and the Spitfire visible and three mines I felt my deployment secure.

I took two orders from him and his Iguana started the party, smearing my Spitfire, I  was just outside 24, damn. Iguana hopped over the gap to attack the Tikbalang and was hit in return losing 1 Str. Firing from cover he critted and I lost 1 Str. Next shot I won and the Iguana exploded, sending the Operator to the roof of a building. Nice landing.

His Bandit moved forward to threaten an Antenna.

The Operator then shot down my Bulleteer, who was out of range of his Shotgun, bringing it to 2. Level unconscious with 2 orders, before hitting the deck. Lastly his Wildcat ducked, before getting shredded in my turn, he was over 32 and in plain sight of my Tik, so he decided to duck.

His second group took his antenna and the Medic suppressed, just because.

First I repaired the Bulleteer. Then my llink advanced and discovered the bandit, before moving into final position with laying a mine, breaking the link to protect the Lt in the backfield and bringing the Medic to the Antenna, but that happened after the Bandit was gone.

The Tikbalang advanced together with the Bulleteer, the Bagh-Mari and the Naga to cover more ground. The Naga took care of the Bandit as I saw that he had no KHD. Here I rolled my only crit of the game and put 3 wounds on him. The Naga then laid 2 Mines to cover himself.

3 Antennas to his one 2 points for me. 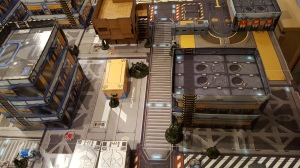 Bent on catching up Senor Massacre started running, after his Koalas had cleared my three Mines to free the path, also he transferred the Medic to his main group.

With smoke Massacre brought the Haris to my link, when he arrived he noticed that a shotgun was too short ranged and attacked my Regular with the Moran, who sent my Soldier into unconsciousness. More smoke saved him from my Sniper and a Jaguar ran free and put his Chain Rifle to use, hitting a Regular, the Medic and the Bulleteer. The Medic dodged, the Regular was killed dodging, the Bulleteer took a wound but hit the Jaguar in return, who saved with a 15. The Tikbalang also hit the Jaguar and another 15 made sure he stayed alive!

Pushing his luck he ran further putting the template on my LT, who did not dodge but survived the hit. This time the Tik shot down the Jaguar. Phew, that was close.

Senor Massacre shot down my Medic on the other side. 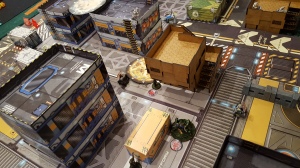 I transferred the LT into the main group and went to work. The Tik walked around and shot down Massacre, the Moran and hit the Medic at his Antenna, but she saved and ducked into cover. Massacre and the Moran went down. The Moran was shredded by more shots and Massacre was Coup de Graced by my Palbot, who, before doing that, repaired the Bulleteer again.

With 2 to 1 Antenna and my Classified I went to 5 points. 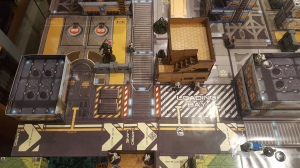 Transferring the Hellcat and the last Alquacil he started by bringing on the Hellcat. He avoided the Mine and the Tikbalang, but was seen by the Bagh-Mari who shot her down. The operator stood up and split his burst between my Naga and the Sniper. The Naga hit him, but he braced the shot, against the Bag-Mari: Crit!

Two more orders later the Naga was on Dogged, which was fine with him, as no one could see it anymore except the Operator, also he did this with a: Crit.

Also three shots Tikbalang: Crit and hit, which I don´t save.

As a final gesture the Wildcats advance take out the pesky Palbot, who already had repaired the Armbot twice and take the Antenna. Also he Coup de Graced the Tik, just to be sure.

We don´t do the final turn, as even like this I win 5-2 and with my remaining orders hardly can do anything worthwile, for making points. In a tournament I probably would have tried to shot the Wildcat from the Antenna, but like this we wrapped up.

A glorious victory for my Shock ArmyJ

I like how the two group team worked out. Two KHD shoud have been a good deterrent against any Hackers, but I never had to use them. His two gravest errors were taking first turn and then not concentrating on the Antenna in the middle. The early loss of the Iguana was harsh, but his shooting was generally good. In all the game only the Iguana and his Jaguar fell to AROs at all, almost all killing was in active turn.

It is an interesting mission and we both tried new tactics, myjust worked out better.